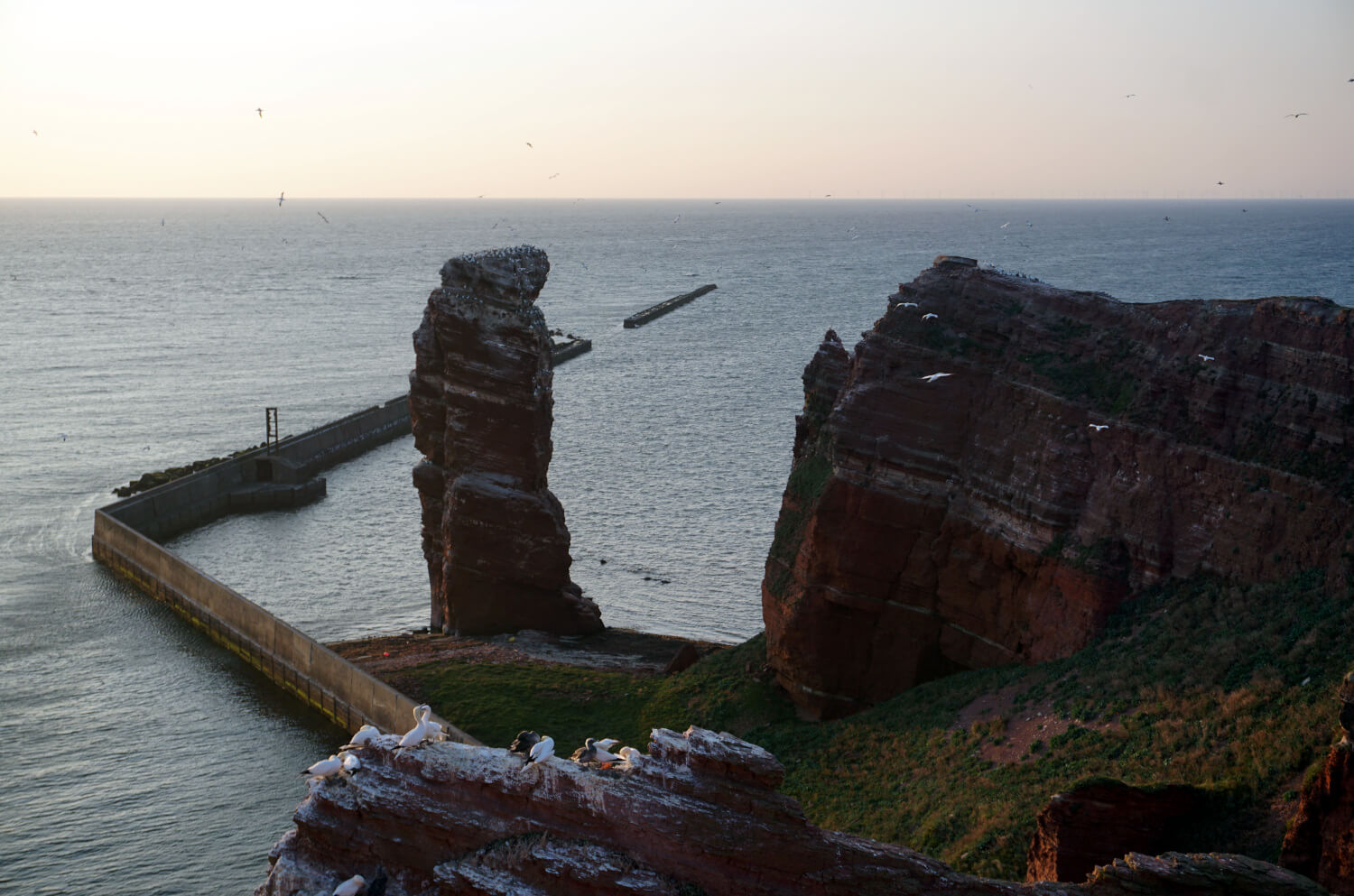 Germany has 16 federal states. Technically speaking, however, it should actually be 17. Because with Helgoland (the only high sea island in Germany) a very special place belongs to Schleswig-Holstein, which actually deserves to be its own federal state. The reason why this is true and why Helgoland is so far the only place in the world that I visited twice, we want to bring you closer with the following report.

To get to Helgoland there are basically three possibilities (if you don’t consider swimming). By ferry you need about 2.5 hours from Cuxhaven to get to Helgoland. Travel tablets are strongly recommended here. With the catamaran you can reach your destination in half the time. With the airplane it is only an “air jump” of 20 minutes. Our recommendation is the catamaran “Halunder Jet” by FRS Helgoline. If you travel to Cuxhaven by car, you have several options to park your car safely. We used the parking service Fehlau and can only recommend it.

In order to better understand the present, we need to know about the past. This is how my former history teacher described the purpose of history lessons. And the knowledgeable man was right. In order to understand and appreciate Helgoland properly, one must have some knowledge of the past. The best way to do this is to take a guided tour of the bunker, which is unfortunately denied to most day tourists. The bunker tour is a mandatory experience when visiting Helgoland and is conducted by a local guide in the Helgoland way.

Helgoland itself has been known as a strategically important island since the year 1300 due to its location in the North Sea. The German Jack Sparrow, Klaus Störtebeker, and other pirates also sought refuge here. For years and centuries the island was tossed back and forth between Denmark and Germany until it fell to the English. In the meantime, the land connection between the island and the dune was washed away during the so-called New Year’s tide in 1721. Today you can reach the dune from Helgoland in a few minutes by the traditional Börte-boats. Here you will find, among other things, further accommodation, the airfield and the bathing beach.

In 1890 Helgoland came back into German possession in exchange for lands in Africa. This is also the origin of Helgoland’s exemption from customs duties and taxes. The English exempted the island from customs and taxes after this helped them to avoid Napoleon’s economic blockade. When the island passed into German ownership, this freedom was retained. Tradition is a must.

Now also began the long-desired development of Helgoland into a base for the German Army. The First World War came. Then came the Nazis and with them the megalomania. Helgoland was to become the central war port of the Wehrmacht and the Hummerschere project was announced. Even today you can see remains of this project from the northern beach, which has never been completed.

The Second World War was coming to an end and Helgoland was bombed several times by the Allies. After the end of the war in 1947, all military installations as well as weapons and ammunition were destroyed with the Big Bang. 6,700 tons were blown up and the largest non-nuclear man-made explosion was carried out. What remained after the end of the war was now completely destroyed. Three things, however, remained: The flak control post (now in use as a lighthouse), the island itself, and the people. However, during the Second World War, the people of Helgoland had to be evacuated from their island and leave it for several years. It was not until 1952 that they were allowed to return home.

And here we are, standing on this historical ground. Just leaving our catamaran and heading from the southern harbor towards the center. The first thing we notice is another characteristic of Helgoland. The island has two levels – the upper and the lower. There are several ways to get up and down. Stairs, step-free paths or even an elevator.

Characteristic for the Unterland (lower land) are its colorful lobster stalls. Here, especially day visitors find enough opportunities to get rid of their money (if they have not already spent everything on cigarettes, alcohol or perfume). We were content with a few photos of this highlight of the island. Further north you get to the center with the tourist info (tickets for the bunker tour are available here) and the shopping mall. At every corner there is something to eat and place to stay. In the northeast of the lowland you can still find the cinema, the museum and the swimming pool.

The Oberland (upper land) is a real tourist hotspot. It is recommended not to make your tour here during rush hour, rather in the morning or in the late afternoon when the ferry has disappeared again. The circular route is equipped with information boards and provides a lot of background knowledge. Up to Lange Anna, the columnar rock in the north of the island, you also pass the Lummen rock with the gannets. Of course, the sunsets on Helgoland are very special. So wrap up warm and enjoy the peace and quiet.

On the upper land, which is basically one crater landscape, you can also find the funnel of a 5,000 kg bomb from the Second World War. A beautiful view is offered by the Pinneberg. It is the highest elevation in the district of Pinneberg (to which Helgoland belongs). At 61.3 meters above sea level, just doable after a tour of the Oberland.

On Helgoland are different accommodation options available. Be it the classic hotel, vacation apartment or even camping. You can choose freely. We opted for a new apartment (modern accommodations are rare) directly in the first row. The „Gateway to the Sea“ (Tor zum Meer – apartment 16) turned out to be it and it was a dream. With a view of the sea and the north of the Oberland. We did not want to leave the accommodation after our week on Helgoland.

If the weather is good, take the first boat towards the dune and plan a day of relaxation. The crossing costs a few euros and takes just as long in minutes. A short walk takes the sun-hungry to the beautiful southern beach. We reserved a beach chair for ourselves. Please note: Beach chairs are rented in the immediate vicinity of the pier and not on the beach itself.

If you can’t stand a day on the beach as much as I can, you can stretch your legs and have a walk along the dune. There is a lot of nature to admire here besides seals and grey seals. Those who find the cemetery of the nameless can ring the bell once in memory of the victims on the high seas. The dune restaurant invites you to linger and refresh yourself after this walk – pure vacation feeling with your feet in the sand and your nose in the beer foam.

Helgoland offers many small restaurants, but you should definitely make reservations in advance. Even if Helgoland sometimes seems like a district in Essen (and I don’t mean Rüttenscheid), you can dine very well. Especially the fish dishes, like pan-fried fish with fried potatoes and mustard sauce, you may try in different restaurants. If you want to have the speciality Knieper (claws of a crab) you have to be a bit lucky. Depending on the catch, these are offered in restaurants. Here, too, it is worth asking and reserving this dish.

Due to our vacation apartment, we were basically self-caterers. Nevertheless, we once visited the Aquarium Restaurant and the Mocca Stuben Restaurant. Both are highly recommended. As a digestif, we enjoyed a Helgoland egg grog in one of the bars, which reminded us so much of the Ruhr area. What’s good for the aunt can’t hurt us, can it? With a cool beer you get this warm drink down finally.

Helgoland is not a beautiful island. At least not at first sight. It takes time and patience to get to know this little spot of the world. But once this happened, you don’t want to leave. Once you have left the time pressure and the hurriedness of the mainland behind you and accepted the pace of the island, the true beauty of Helgoland unfolds. With lots of nature, tranquility and of course history. Oant sjen.

Fancy a taste of Germany? Then keep on reading here: our German-Tour.