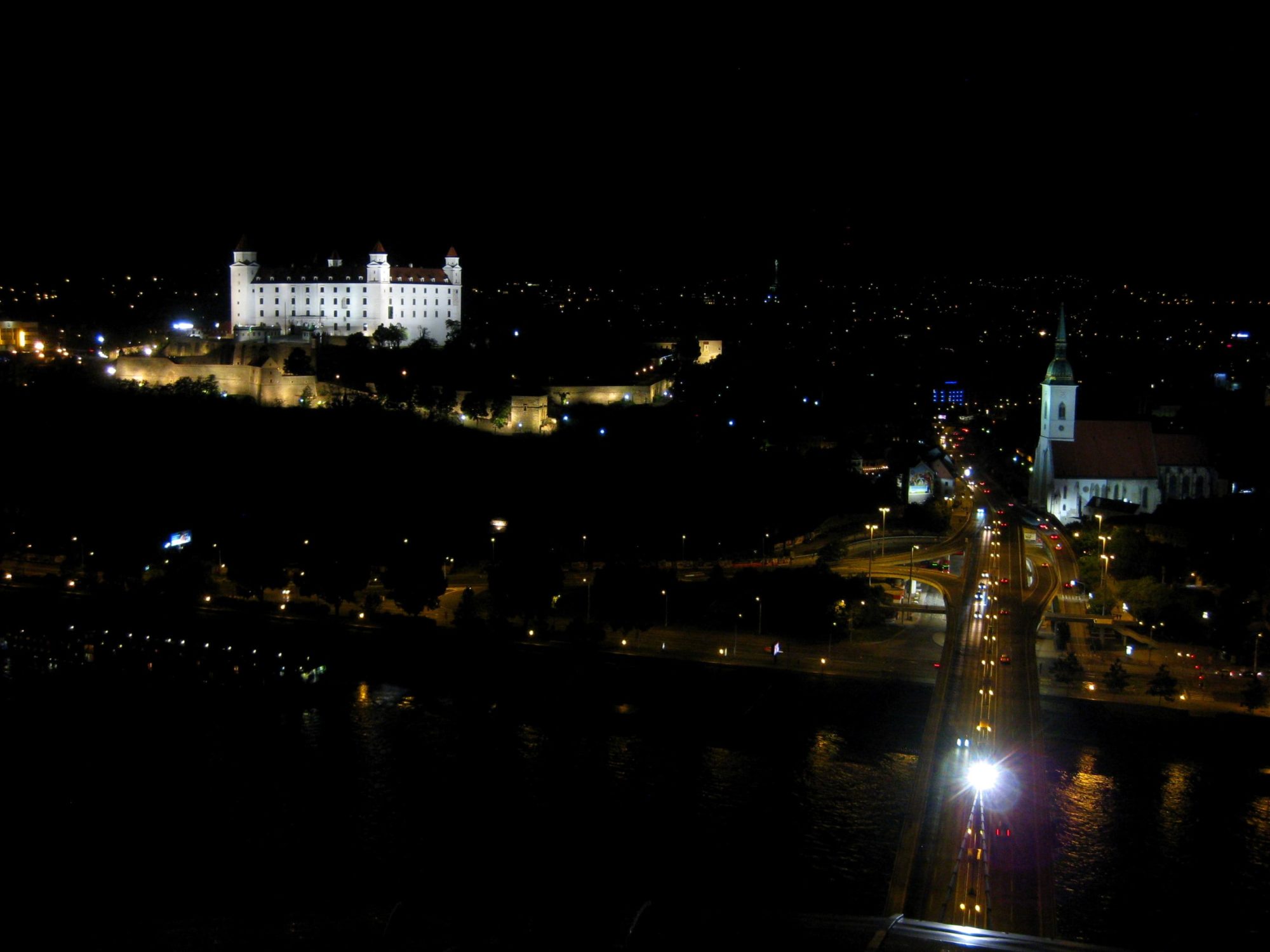 A Roadtrip to Bratislava

The time has come again. Thanks to a federal holiday a long weekend was ahead of us. So my buddies and I took our annual trip to a city of our choice. After visiting Prague and Budapest in the past 2 years we now chose Slovakia’s capital Bratislava. We decided to make it a roadtrip and started early, around 7 o’clock, on a Thursday morning.

After an enjoyable and quick 800 km drive with only one stop (that’s the advantage of travelling without smokers or women, for that matter) we reached our hotel Film Hotel early and relaxed in the afternoon. Our apartment was laid out for 6 adults but we were only 4 so there was plenty of space for everyone. Also the second bathroom was very much appreciated as we learned from previous trips. Over all, the hotel was great. Not just because of its location (side street to Obchodná, the place for going out at night) but also because of its value-for-money ratio and the new furniture.

The historic downtown of Bratislava was our first destination on that day after unpacking our stuff. While getting an overview of the layout of the town to find our way around we already looked at some of the sights that Bratislava has to offer. All over town you find sculptures that all have different backgrounds and meanings. For example on the main square in the historic downtown Napoleons Soldier leans relaxed on a bench. Fittingly the French embassy is located right behind the statue.

Leaving the main square going south you will bump into the life-sized statue of Beautiful Náci. It was created in honor of IgnácLamár, a famous inhabitant of Bratislava. If you keep walking through the picturesque little streets downtown you basically trip over the next statue – Man at work or Cumil. This statue represents a relaxed looking working man that peeks out of a gully cover.

We keep walking through the appealing historic downtown and come to Hviezdoslavovonámestie – a long square in between the Bridge of the Slovak National Uprising and the Historic Building of the Slovakian National Theatre. Here you can take a short break and strengthen up in one of the cafés or bars. On our way back to the hotel we went grocery shopping and decided to stay in the very stylish hotel bar that first evening.

The next morning we walked to the Slavin War Memorial, a park-like area that was created in honor of the soviet soldiers of the Second World War with memorials, cemeteries and memorial plaques. This war memorial is situated on a hill and offers a great view on Bratislava Castle, our next destination that we reached after a 20-minute walk.

Bratislava Castle, again, offers a well-maintained, neat area and is therefore a great location to take pictures or just stay and unwind. There are multiple sections and an inner courtyard. We chose not to pay the entrance fee to the main building and enjoyed a nice and cold beer in the beer garden instead. Over all prices in the restaurants in the historic downtown are quite high. Ten euro for a burger and fries is not exactly cheap. The beer rate however is not bad at all. Depending on the location you’ll pay between 1,60 € and 2,90 € for half a liter.

From the castle you have a nice view on our next destination: the Bridge of the Slovak National Uprising (Most SNP or UFO Bridge) with the UFO (a restaurant and a bar in dizzy height with a visitor platform above it). Since the entrance fee to get up there was rather high (7,40 €) we decided to come back at night time when the sun was down so we could have a nice view over town in the dark for a change. That, by the way, was definitely worth it. But our goal was not to have a romantic trip so we skipped the restaurant part. For couples though it is a great spot to spend some one-on-one time and enjoy a romantic dinner.

At night we wanted to get to know the much-vaunted “Partyslava” and decided to go to the Nu Spirit Club. Really, the only bad thing about this club was that we were the only guests. So around half past twelve we agreed on changing locations to somehow rescue that night. Don’t get me wrong, we don’t have anything against exclusivity but to have an entire club all to yourself is something different. We went on to the next club called Radost’ Music Club. Here the 10 € entrance fee did not daunt us anymore. In the end you could say that this club was more like a vault but with charm (as much charm as you can get out of an underground vault anyway). This club was much more well-frequented so therefor we could find a positive ending to this night out.

On Saturday morning we left the hotel early to catch our boat to Devín Castle. Beforehand we already decided to take a 2-hour trip there and ordered our tickets online. Online booking even comes with a discount (10,80 € instead of 12,00 € per person) so it was a win-win situation since we avoided the crowd onsite and could basically just hop on the boat without organizing anything down there. The boat ride to the castle was about 1,5 hours. Once you get there it is a little walk up to the castle or the ruins of the castle as I would say. If you want to visit the castle you need to spend another 5 € to get in. But in contrast to some buildings along the edge of downtown these ruins are well-preserved and nicely arranged. Time just flew by up there so a stay of 4 hours would be a more relaxed alternative.

Back in town we ate at a restaurant on Hviezdoslavovo square and went back to the hotel to recover from the day and get ready for our last night. This time our destination was the Subclub that was located right under the Bratislava Castle. Because of its location and the bunker-atmosphere with tunnels as the entrance area the club surely is something special. Even though it wasn’t packed with people we had a great time and for one evening this place was worth the entrance fee.

We arrived in the hotel shortly after 5 o’clock in the morning (the sun was already up and announced the next summer day) and decided to go straight back on the road and head home. With a little alcohol left in our bodies we left Bratislava with a positive feeling that is still present while writing this. Bratislava as Prags’ and Budapests’ little brother is definitely worth a visit, ideally for a weekend.