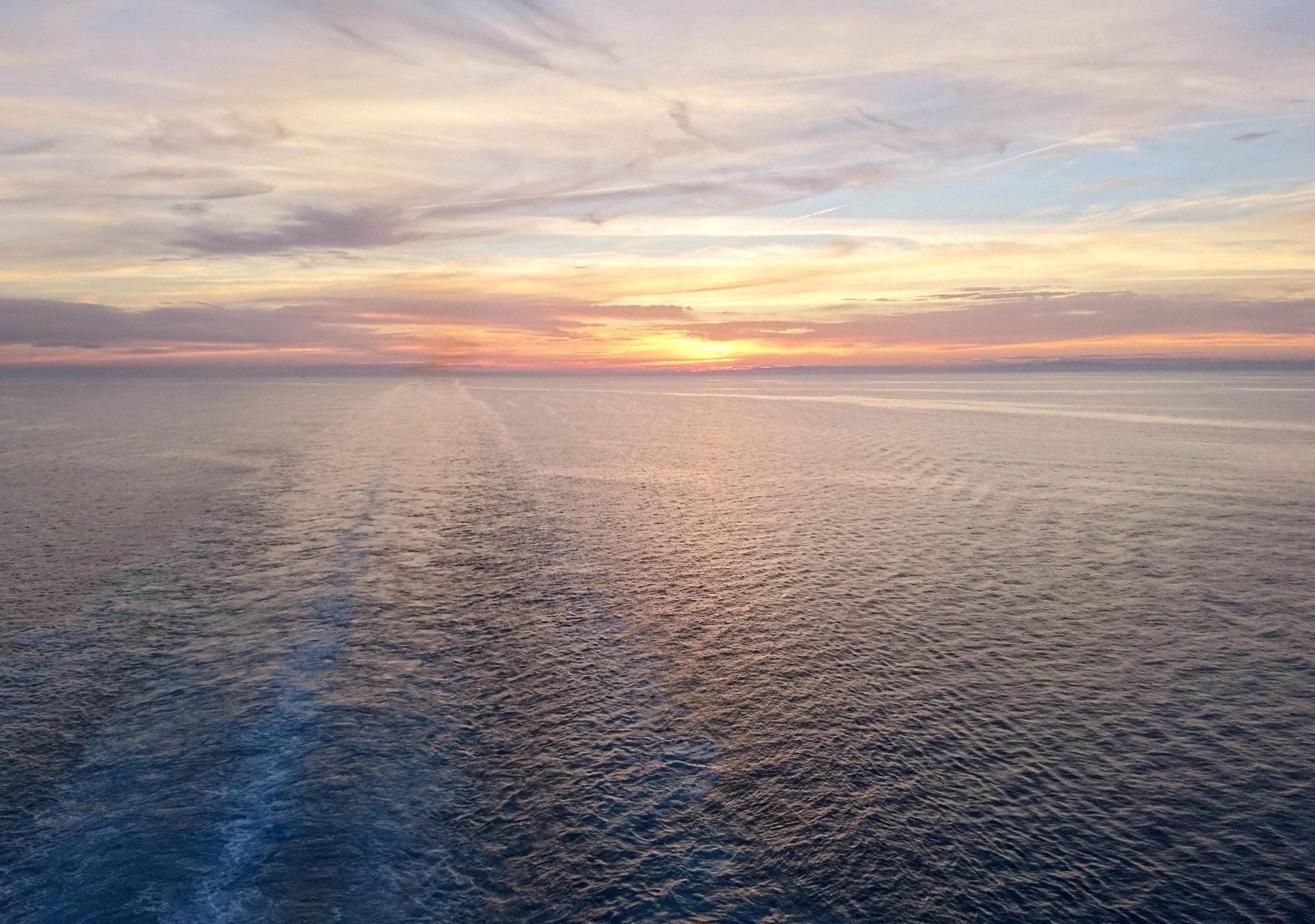 An overnight bistro-bus took us to our cruise ship from Frankfurt to Savona in night of Saturday to Sunday. Driving by Freiburg, Basel, Lugano and Milan, this 850 km drive took about 10 hours and we could enjoy the beautiful scenery of mountains and lakes in Switzerland through the picture window. Once we arrived a welcome-breakfast awaited us and it was already included in the price.

When we arrived in Savona we had to kill some time (around 3.5 hours) until the embarkation started at 13:00 h. That is no problem though since you can use the time to explore downtown or enjoy your free time on the outdoor patio of the restaurant in the harbor terminal. The good thing was that we didn’t have to worry about our luggage (max. 20 kg per person) because it was transported from the bus to the cabin on the ship by staff members of the cruise ship.

After embarkation every passenger got a board-account and received a card, Costa Card, which was the means of payment on the ship. You could check your Costa Card balance on the TV in your cabin anytime. In addition to the board-account every passenger received a daily bulletin called “Diario di bordo” that contained the important information about the planned activities and on-board events, like activities in the wellness and fitness center, games in the sporting area, the musical evening entertainment in the theatre or the restaurants, the disco in the dance club as well as the casino and excursions.

At 07:00 h in the morning the harbor guide came on-board and guides the ship into the harbor of Marseille, France. Guests who did not book a guided tour ahead of time could take the shuttle bus from the terminal to town (until Virage Vaudoyer, approx.. 8 km). All-day tickets for the bus were sold on-board at a price of 10€ per person.

We started our tour in town with the cathedral of Marseille (Cathédrale de la Major), visited the Fort Saint-Jean and the Museum of European and Mediterranean Civilizations (MuCEM). For the tour around town we chose the City Train (ticket 8€ per peron) that took us from the old harbor (Vieux Port) to Notre Dame de la Garde. During this tour we could enjoy the look at the Corniche and other beautiful spots of Marseille, like fortresses, the Palais du Pharo and the Abbey of Saint-Victor de Marseille with the Frioul archipelago as a picturesque background. From the coast the City Train took us 162 m higher to Notre Dame de la Garde that is towering over the breathtaking city panorama. Up there the City Train took a short break, just enough time for some taking some photos, enjoy the panoramic view and a short visit to the inside of the church. After that we were taken back to the old harbor.

We had some time left so we ate lunch and went on a little shopping tour in the shopping mall called Les Terrasses du Port that is located directly on the coast. Afterwards the shuttle bus took us back to the ship. After a quick security check of our hand-luggage and the Costa Card we could go back on-board. At 17:00 h the Costa Pacifica left the harbor of Marseille towards Barcelona along the Golf de Lion.

We arrived in Barcelona at 07:30 h and reached the harbor after a 30-minute maneuver. Our scouting expedition through Barcelona could begin! In Barcelona you have three possibilities to get downtown: 1) you book a tour like we did and are taken downtown, 2) the shuttle bus or 3) you just walk because it is only 2.5 km to the Plaza del Carbon from the terminal.

Our panorama-tour through Barcelona started in Barceloneta, a traditional quarter of sailors and fishermen, with colorful houses that spread a cheerful and lively atmosphere. The bus drove by the Columbus Monument and took usto the southern end of La Rambla, a long tree-lined pedestrian mall, that is famous for its numerous street artists. From here the bus drove along the imposing Via Laietana towards the pulsating center of town, the Plaza de Catalunya. We also reached the most famous shopping area in town, the Passeig de Gràcia where well known designers and architectural masterpieces (like La Pedrera and the Casa Batlò by Antoni Gaudí, the palace of the catalan music and more buildings built in the style of catalan modernism) are lined up right next to each other.

Once we reached the SagradaFamília we took a break to take a close look at this impressive neo-Gothic cathedral. It was built by the Catalan architect Antoni Gaudí who was only 30 years old when he planned it and spent the rest of his life building it but he didn’t get to finish it. Our tour guide pointed out some interesting and important details about this famous and unfinished masterpiece.

Towards the end of our tour the bus drove to Montjuïc where the world exhibition was held in 1929. In the scope of the world exhibition huge sport areas, conference rooms, parks and gardens were created that, even today, make the Montjuïc one of the most important recreational areaof the town. Before the bus took us back to the Plaza del Carbon we had time to enjoy a last panoramic view over the town from the peak of Montjuïc.

From the Plaza del Carbon we walked to La Rambla to have lunch, explored the maze of Barcelona’s little and narrow streets and strolled over the Plaza de Catalunya.

At 18:00 h the Costa Pacifica left the harbor of Barcelona towards our next destination: Valencia.

The distance from the terminal to downtown Valencia is 8 km and again it is possible to take the shuttle bus to the city center (Calle Pintor Lopez) for 13,00 € per person (both ways).

The starting point for the city tour was the historical city center of Valencia with its major medieval sights like the Mercado Central and Llotja de la Sada (the Silk Exchange) that is a UNESCO World Heritage Site. From there we went to the Plaza Redonda, to the cathedral and the Plaza de la Virgen. Following this little interesting tour we visited the basilica and the Palacio De La Generalidad – a beautiful Gothic-style building.

Afterwards we went to one of the most famous Horchateria’s in town where we tasted one of the famous products of Valenica – the Horchata. Horchata is a refreshing beverage made out of ground almonds, sugar and water. You combine this drink with warm Fartons, a typical flour-meal (with yeast) from the region of Alboraya.

After our guided tour through the old city center we had short visit to the City of Arts and Sciences that is situated in the dried-out riverbed of the river Turia along the central park towards the south and is approx. 3 km long. Here we looked at the Opera and the Palau de les Arts Reina Sofia, the planetarium und the cinema L’Hemisfèric, the sciences museum Museo de las Ciencias Príncipe Felipe as well as the ocean parc El Oceanográfico.

At the end of this tour we were taken back to our starting point (Calle Pintor Lopez) where we could hop on the shuttle bus and back to the ship.

At 18:00 h we left the harbor of Valenica along the coast and past the islands Ibiza and Mallorca towards Cagliari.

The cabin (out-side, middle class) has a queen-sized bed, a desk with a big mirror, a little couch and food rest as well as a closet, a bathroom including hair-dryer, LCD screen and satellite TV, radio, telephone, safe, refrigerator with a mini bar and of course air-conditioning. Every room had a personal steward who was responsible for cleaning and setting up the cabin for the night. For that service they charge 10€ per person per day on your board card.

Dinner also has its rules. On this ship it was organized as follows: There is two dinner times. The first one is between 18:00h and 18:30h, the second between 20:00h and 20:30h. You have to decide beforehand which one you want to attend, and it will be that way for the entire trip. Every guest gets an assigned table and you put together your own menu. In addition there were specialty-restaurants. To reserve a table in one of those you have to pay a reservation fee but in the end you get a more exquisite ambiance and can enjoy some culinary highlights. Other than these possibilities you could also eat at the self-service buffet.

At 06:00 h in the morning the ship entered the Golf of Cagliari and landed at 08:00 h. In Cagliari the authorities do not allow people to walk across the harbor area. Therefore the public authority organize a shuttle bus service that takes the passengers from the ship to the exit of the harbor area for free.

To explore the town we chose to buy tickets for a city bus (10€ per Person). First the bus took us towards the Basilica di Bonaria and the white jetty. The basilica’s name originates from the virgin Bonaria. Afterwards we went further to the Viale Poetto that runs along the awesome beach of Cagliari (Poetto), and to the little salt lakes that are economically important for the town and also create a gathering point for flamingos that like the mild Sardinian winter season.

Back in town we went up to the peak of Monte Urpinu. From up there we enjoyed a marvelous view over the entire Golf of Angeli. Following that view we went to the old part of town with its highest point, the Castello. Once we got there we strolled along Viale Buoncammino to have a good view on the theatre Romano that was built in the first century. Our little walk ended in front of the citadel under the tower of San Pancrazio, one of the oldest towers in the area, and fromthere we went back on the bus and towards the ship.

We left the harbor of Cagliari at 17:00 h and the Costa Pacifica set course for Civitavecchia, along the Sardinian coast and through the southern Tyrrhenian Sea.

The transfer by bus from Civitiavecchia to Rome takes about 90 minutes and we were picked up at the harbor.

On a sightseeing bus we proceeded with our tour. The bus took us by the most famous monuments of  Rome, like the Altaredella Patria, the Roman Forum, Trajan- and Augustus Forum. The bus also stopped at the majestic Colosseum, the symbol of Rome. We looked at the Colosseum from the inside and then went on by foot.

The tourguide started the walk with a visit at the Trevi fountain, a great baroque monument. Visitors of the Eternal City throw two coins over their shoulders into the fountain: one, to return to Rome and the second one to make a wish. Here also stopped for lunch before we went on to the Pantheon, one of the best preserved monuments from antique times.

From the Pantheon we walked to the Piazza Navona where, still today, you can feel the atmosphere of the 17th century. On Piazza Navona you will find the catholic church Sant’Agnese in Agone and three fountains. In the center of Piazza Navona stands the Fontana dei Quattro Fiumi (Foutain of Four Rivers). The four statues symbolize the Ganges river (symbol for Asia), the Nil river for Africa, the Danube river for Europe and the Rio de la Plata for America. On its southern side you will find the Fontana de Moro (Moor fountain) and on the opposite side the Fountain of Neptune.

Finally after a long day we went back on the bus and were taken back to the ship to Civitiavecchia. At 18:00 h the ship left the harbor towards our last destination of the trip: Savona. The ship went by the islands Giannutri, Giglio and Corsica.

Early in the morning we were able to see Ligurian coast. Savona was the end of the trip and from there we were taken back to Germany by bus.