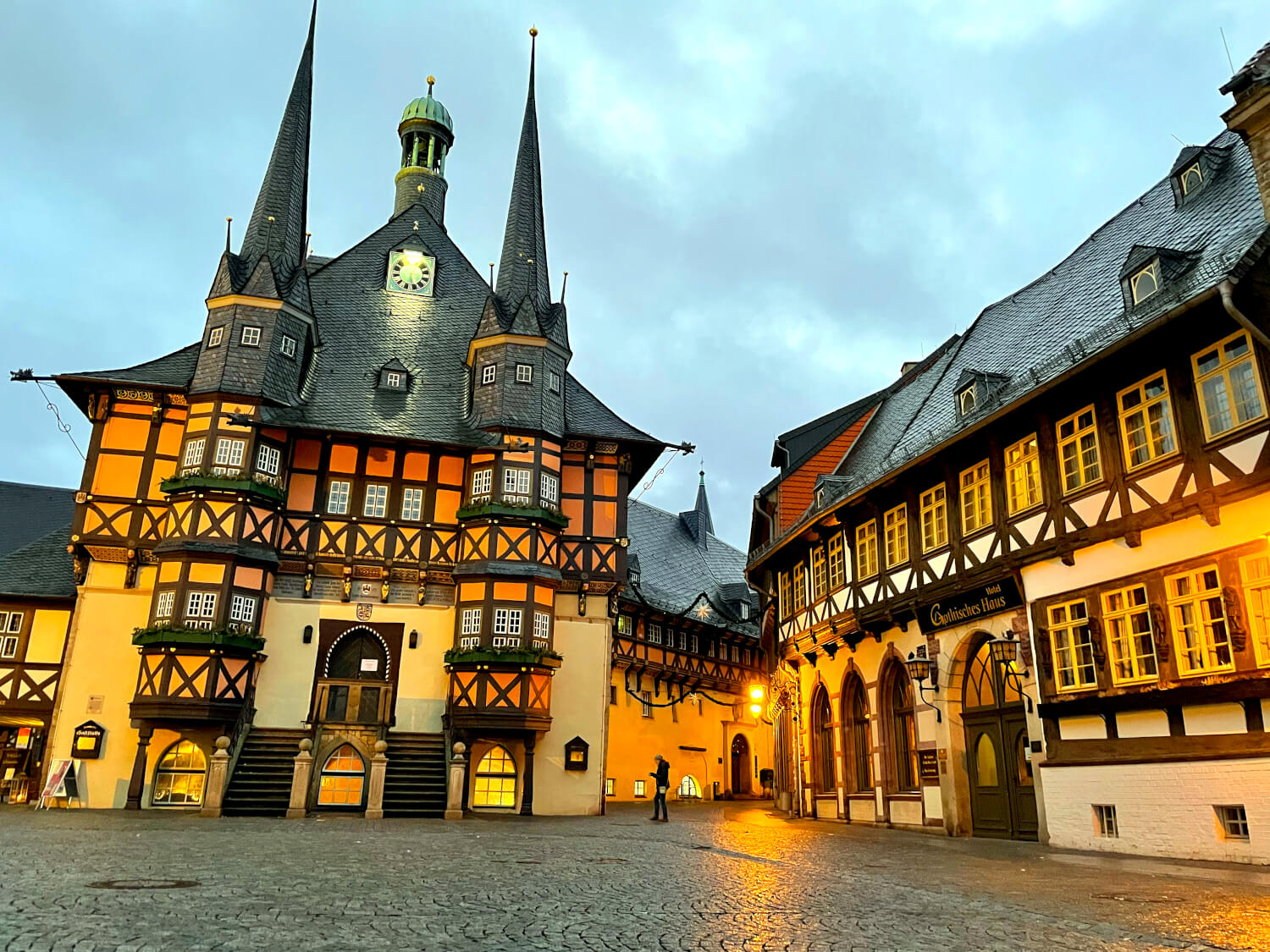 Spurred on by our Iceland trip and the right equipment still more or less ready at hand, we spontaneously went on a weekend trip to the beautiful town of Wernigerode and the Brocken. The Harz in central Germany was thus our destination, which we still had open from our trip through Germany.

Our arrival was on Friday evening at the Hotel Erbprinzenpalais. The hotel was strategically located for us between Wernigerode Castle and the city center. The hotel convinced us with its classic style and the old building charm. Especially the breakfast room with its high ceilings and wooden floorboards impressed us. We can therefore only warmly recommend this historic hotel.

On Saturday, we headed out early for an eventful day of exploring. Our first destination was the main train station. In fact, we left Wernigerode first to make our way to the mountain Brocken. With its more than 1,000 m height, it is the highest mountain in northern Germany and popularly known as Blocksberg. Normally, of course, we would master this altitude on foot (as already proven with the almost equally high Table Mountain in Cape Town). But we decided to take the train.

Where the witches frolic

Even the way up to the Brocken with the Harz Narrow Gauge Railway is a sight to behold and an experience. From the main station in Wernigerode, you first take the Harzquerbahn to Drei Annen Hohne. From there, you can reach the summit in just under an hour with the Brockenbahn. With 700 horsepower, the steam locomotives drive the wagons with the passengers up the mountain. A great panorama and a picturesque pleasure made this trip.

Arriving at the top of the Brocken, a fairytale winter landscape awaited us. Defying the raging winter storm, we got an overview and walked through the Brocken circuit. Due to the weather, the view was very limited and reminded us of our visit to the Königstuhl near Heidelberg. But this way we could take care of our struggle for survival and were not distracted. The snow/hail mix, in combination with the wind, made for a nice natural peeling.

Of course, a souvenir photo in front of the Brocken rock in the middle of the complex was not to be missed. We felt as if we had just climbed Mount Everest. At least the pictures give us this impression. Completely soaked and completely exhausted, we retreated into the warm and dry. The tourist hall invites with its canteen flair to recharge our batteries. Best German snack cuisine and one or the other Schnaps in addition, and already the world looks better again. Exhausted, but happy and strengthened, we took the return trip.

Back in Wernigerode we walked through the old town and stopped at one or two places worth seeing. So first of all, the Krell’s forge (anno 1678). The special fact about the forge is that it is still in operation and is therefore called the oldest forge in Germany that is still in business. In addition, blacksmithing courses are also offered here. In any case, a great thing. Not only because of its rarity, but especially from a historical point of view.

Continuing along Breite Straße, one quickly arrives at Krummel’s House. This listed house was built in 1674. The building is known for its richly and elaborately decorated facade. In its basic form of a baroque half-timbered house, it is not recognizable as such because of the wooden reliefs. Today this building serves as a residential and commercial building with gastronomy.

Continuing westward, we arrived at the marketplace of Wernigerode. The market place does what it does. Namely, it is centrally located and features many historically valuable buildings. A dream for every half-timbered fetishist. Furthermore, the Benefactor’s Fountain (Wohltäterbrunnen) can be found in the middle of the market square. The fountain is artistically designed and was built in the 19th century as a gratitude to the patrons of the city.

As beautiful as the market square is in itself, the town hall outshines everything else in the city. With its castle-like design and the twin towers, the dome, the half-timbering as well as the clock, this building from the 15th century is rightly the landmark of the city of Wernigerode.

Compared to the town hall, the Schiefes Haus museum looks like the misshapen cousin of the town hall. Nevertheless, a visit is worthwhile. For one euro, the visitor gets interesting facts about the city and the reason for the leaning. Who needs the Leaning Tower of Pisa when there is the Leaning House of Wernigerode?!

After the most crooked house, the smallest house was still missing on our list of explorations. Today it is used as a folklore museum. The width of the house is just under 3 meters. The entrance door is 1,70 m high and the ceiling height does not exceed 1,90 m. At peak season, the number of people in the house is said to be equal to a soccer team (without reserve players). Micro Living established thus already 1792 in Wernigerode.

Then we let the day end comfortably in the Brauhaus Wernigerode. Of course, the Harz cheese as an appetizer was not to be missed. Likewise, the Brauhaus hell as a fine tart refreshment. The menu offered a selection of hearty dishes and the rustic ambience contributed to the overall positive package. A successful end to the day was realized.

On the day of departure, we still took advantage of the good weather and walked to Wernigerode Castle on a hill overlooking the city. A great view and a nice tour were possible at the top. The entrance to the castle interior we waived at this point and continued on the way to the car a detour past the Pleasure Garden. Nature was awakening from hibernation and spring was on the horizon. Apparently, the winter had once again shown us its truly cold shoulder, before now the neckline of spring was to come.

Do you have any questions or suggestions or did we even miss an important sight? Then just write us or comment.